Castles and Counts in Celje, Slovenia

Shakespeare should have visited Celje. The town’s dramatic history is worthy of an epic play. It’s all on display in an easy day trip from Ljubljana. Here’s how to plan your visit:

Arriving on a Sunday morning by train from Ljubljana, we hailed a taxi to go to the Celje Castle, on a hill outside of the town. We didn’t have to sack the place to get in. Kids and teens get free or reduced admission at this very child-friendly attraction. Check the Celje tourism website for the current ticket prices and opening hours. 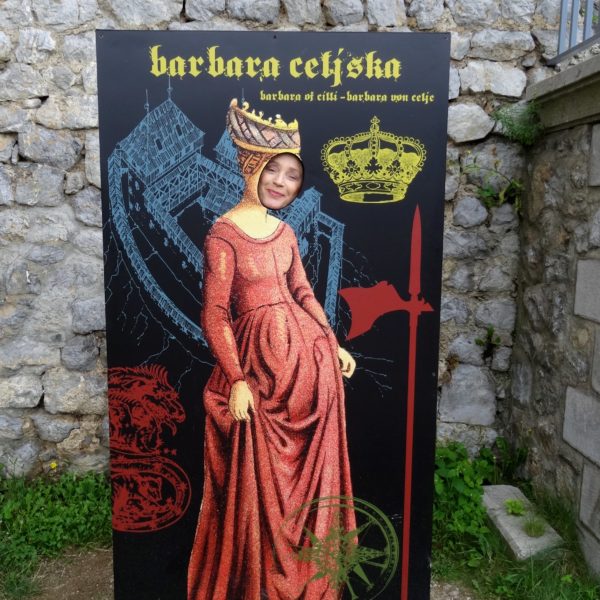 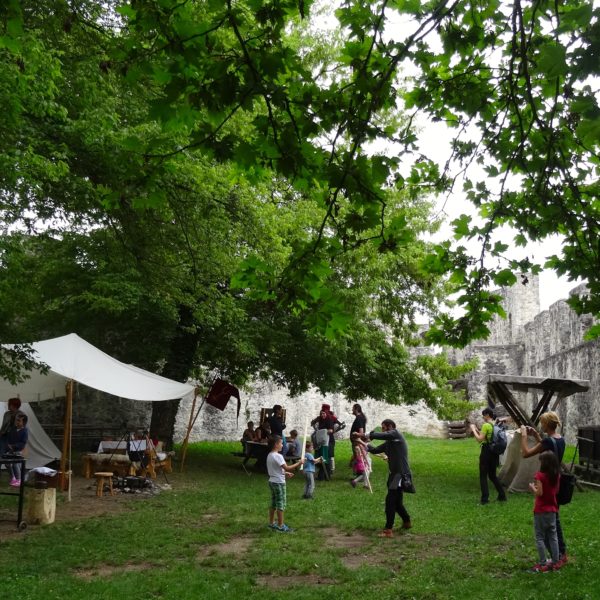 While the views are magnificent, the partially restored ruins are a far cry from the mighty fortress this must have been in centuries past. Built in the 1200s, the fortunes of the castle rose and fell with the Counts of Celje. There isn’t much royal splendor to see and most of the rooms are empty. The highlight is climbing the four-story Frederik’s tower, with a dungeon at the bottom, storage levels in the middle and a defensive platform — with more expansive views — on the top. There’s a performance area where Celje’s own Romeo and Juliet story is played out in an elaborate musical on various dates in the summer. Although it’s in Slovene, the music and staging are still impressive. Here’s the trailer:

According to legend, Prince Frederik II’s father disapproved of his marriage to a local woman, Veronika of Desenice. The Count locked his son in the tower and had Veronika tried for witchcraft. She was acquitted but murdered by drowning. This ill-fated romance inspired one of the story lines in a series of YA historical fantasy novels by Slovenian-American author Andrew Anžur Clement. You can download “Voyages of Fortune” on Amazon here.

Meet the Royal Skulls of Celje in the Princely Palace

If you want to learn more about the Counts of Celje, you’ll need to head back to the regional museums in town. It’s a pleasant walk down the hill. Prices and opening hours on the Celje tourism website.

The Princely Palace is notable for the basement excavations of the ancient Roman town of Celeia — a city beneath the city. Upstairs, the displays of natural history and early civilizations seem chiefly aimed at school group visits, but when we visited on a Sunday afternoon in July we felt as if we were the only visitors there! 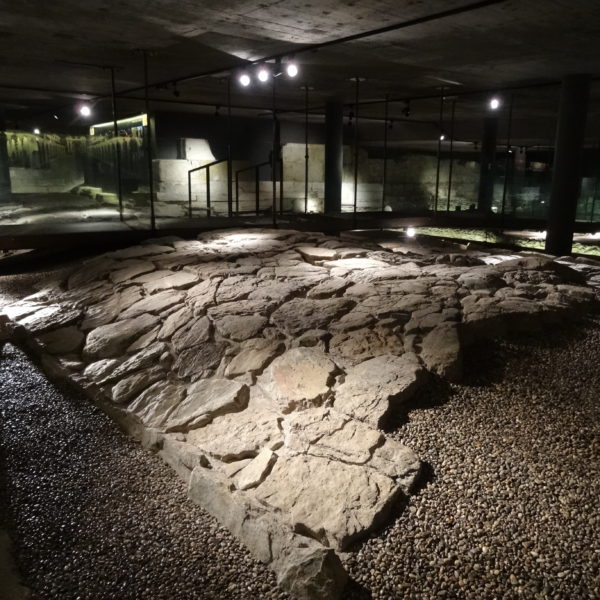 There’s much more background  on the intrigue surrounding the family who built Celje Castle on the hill. Their skulls are on display in glass cases. It’s a creepy tribute to a dynasty that accumulated wealth and power through the heroic deeds of the men and the strategic marriages of the women into the ruling families of Poland, Bosnia and Serbia. Barbara of Celje married the Holy Roman Emperor, Sigismund of Luxembourg, King of Hungary and Bohemia. The Counts of Celje successfully fought the Hapsburgs but made a lot of enemies. Hungarian rivals assassinated the last count in 1456. Without an heir, the dynasty died out to the cry of “Counts of Celje, today and never again!” The three stars of their crest can still be seen on the Slovenian flag. 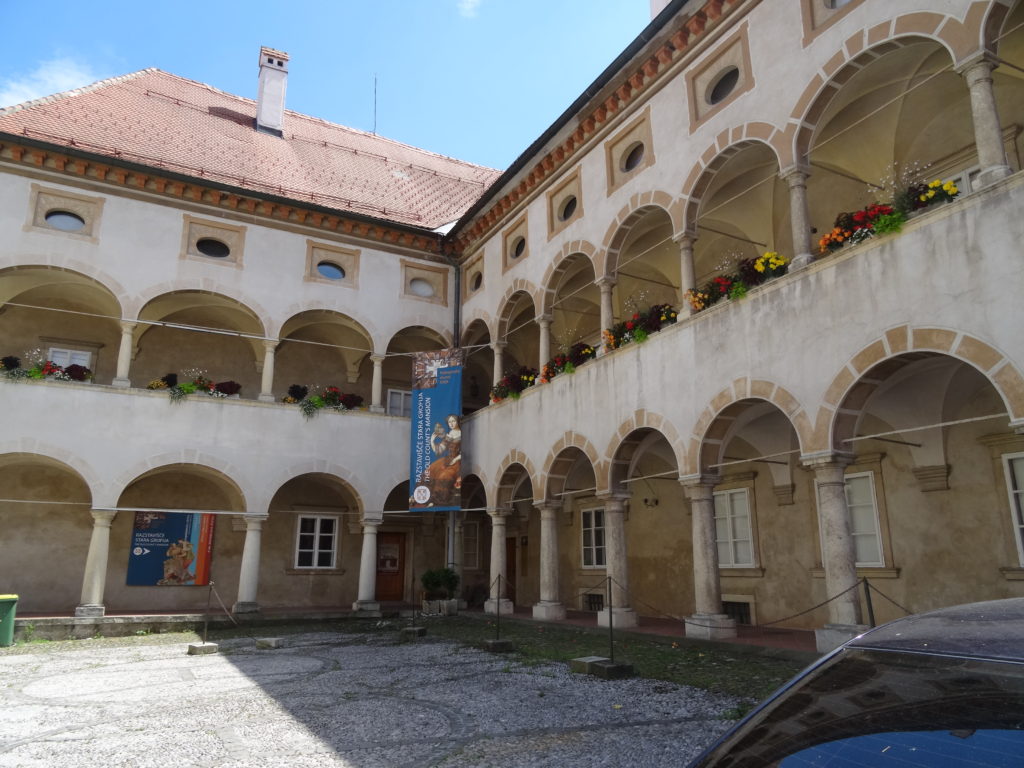 A Splendid Ceiling and More of Celje’s Dark History

The Old Count’s Palace was the second museum on our Celje museum ticket. It’s the Renaissance palace a short distance away from the prince’s mansion. Do not miss the spectacular ceiling painted on canvas and the delicate room frescoes in the old count’s residence. There are a number of other objects and paintings identified only by number, requiring a scramble to locate an information card in your language to know what you are seeing. 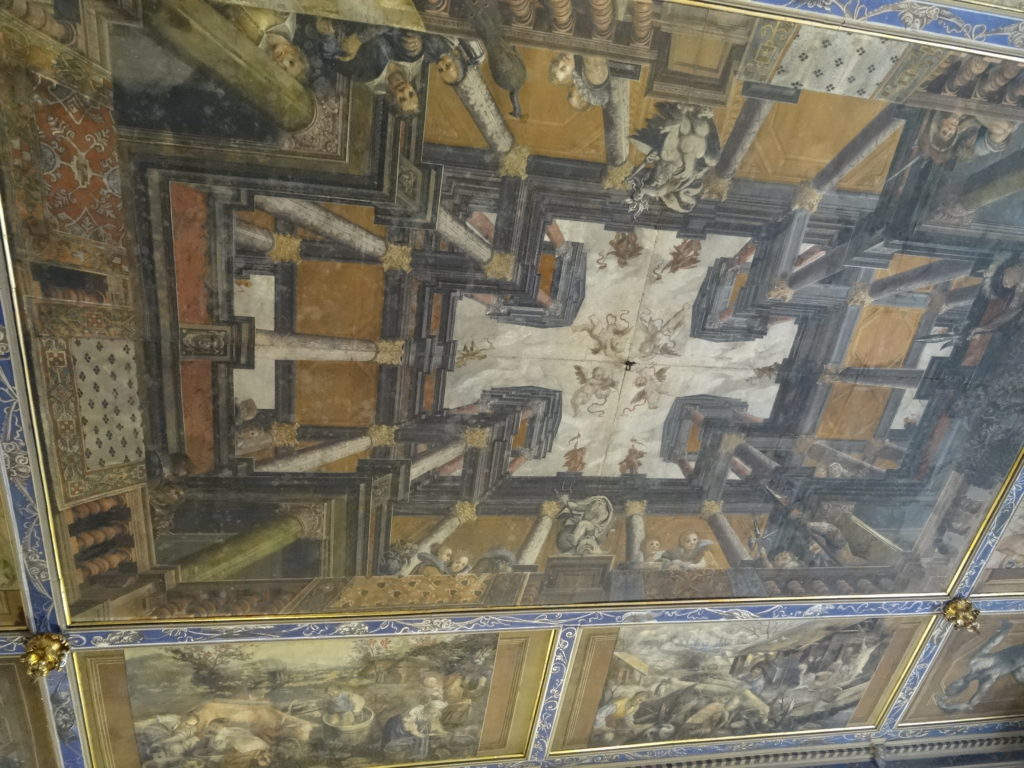 The Celje Ceiling, an Italian art masterpiece from the early 17th century, discovered by accident in 1926.

Celje does not shy away from other dark aspects of its history. Another museum in town is the former World War II Nazi jail, but visits must be arranged in advance. Suffice it to say that the population suffered greatly and hundreds of “stolen children” were taken by the Nazis for a “Germanization” program. Many Slovenes were tortured and killed in a notorious prison camp nearby. 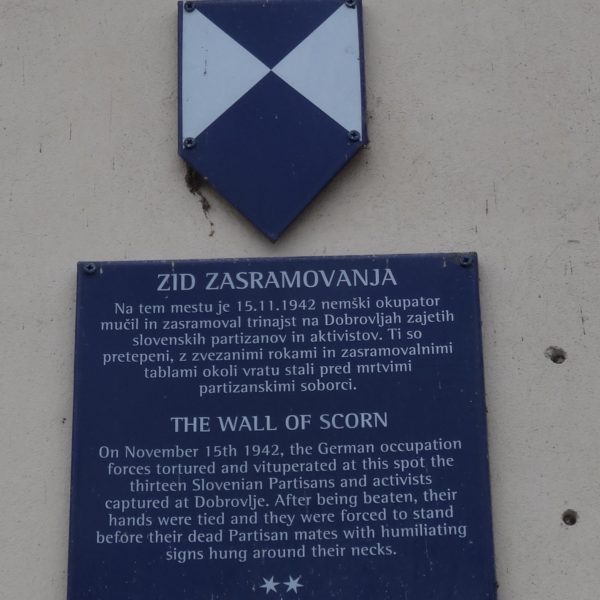 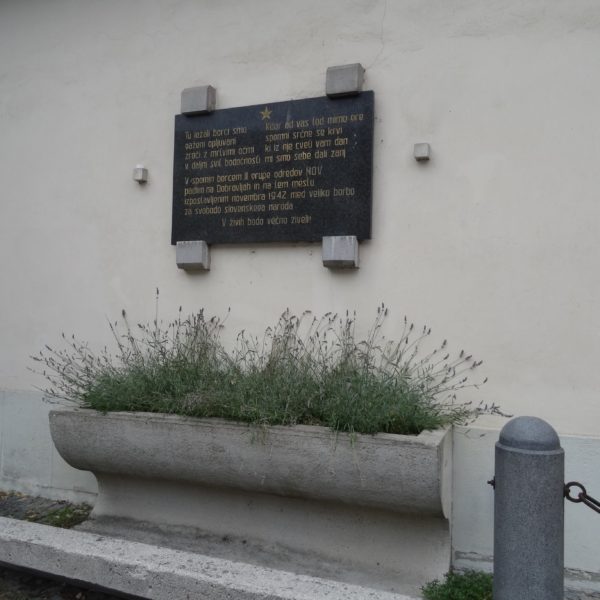 The atmosphere of Celje today is relaxed and safe. Wandering the streets you’ll discover several pleasant squares and lovely churches. It’s a car-free pedestrian zone with tons of charm and photo opportunities. 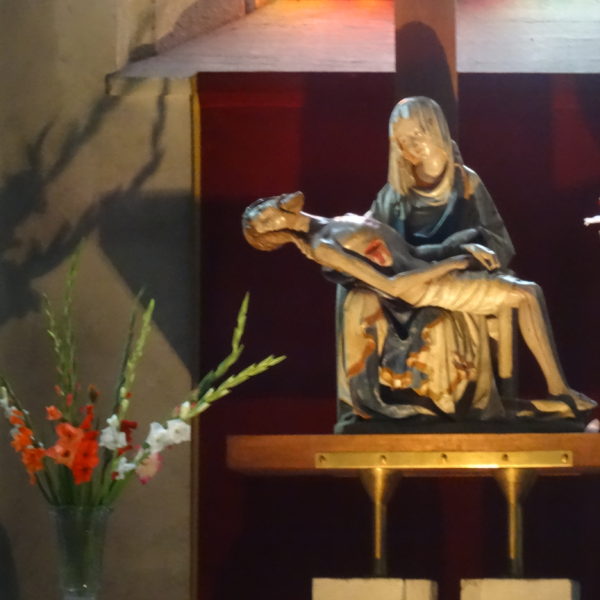 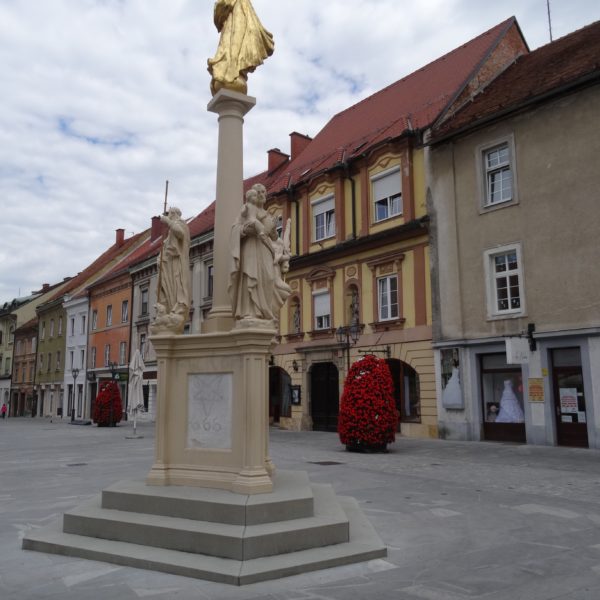 Another awesome discovery is the story of Alma Karlin, a local woman who traveled around the world alone for nine years in the 1920s. There’s a charming statue of her about a block from the Celje train station. Constantly battling tropical illness and writing articles to prevent running short of money, her adventures would make an epic movie! The souvenirs she brought home are on display in a permanent museum exhibit in the Renaissance Palace. I like to think of her as the world’s first travel blogger. 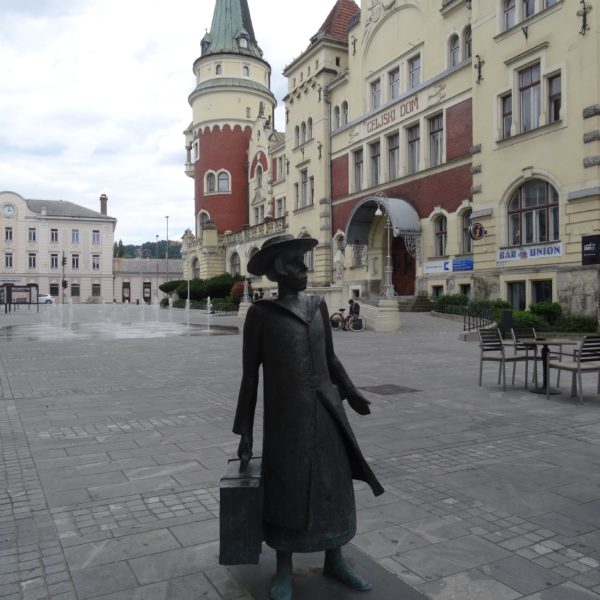 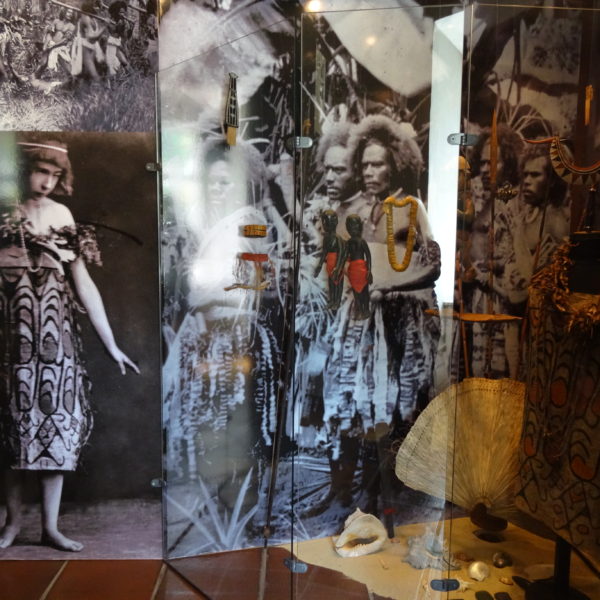 If you’re up for a short hike and you have a car to take you to the starting point in the nearby hamlet of Pečovnik, you can walk up to the humble house where Alma Karlin spent her sunset years, shunned by the townspeople. From the top of the hill, you’ll have a splendid view looking back toward Celje Castle.

So why did Alma set out to travel the world, with no money and a passport that few other countries recognized? Imagine Alma as a young girl, playing in the ruins of Celje castle. She finds a mysterious message from Prince Frederik, who was held prisoner in the tower centuries ago. To decipher the message, she sets out on the Voyages of Fortune that will change her life forever. Or at least that’s how my son, the author, envisioned it. Let your own imagination run wild. 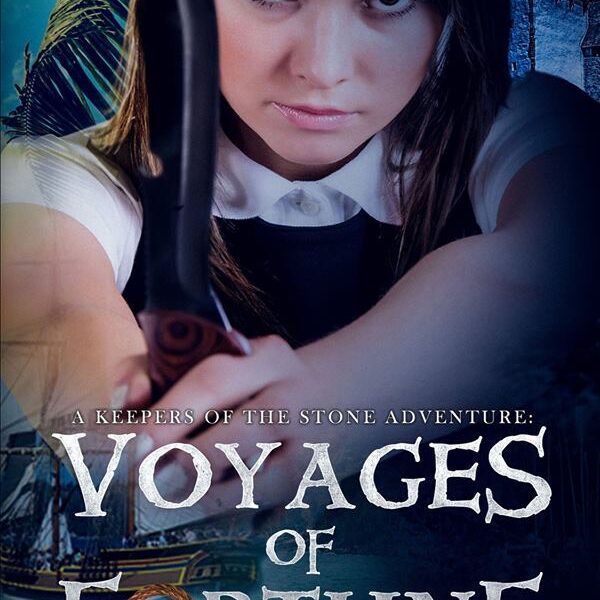 Where to Eat in Celje

Choices were limited on a Sunday afternoon, but we had a delicious Italian meal at Spageterija in Pizzeria Koper, which is attached to the #1 ranked hotel in Celje. We washed down our salads and pizza with frosty mugs of Laško beer, brewed in a neighboring town. Our friends at Let’s Go Slovenia also recommend a fine Slovenian Inn called  Pri Kmetec on the hill near the Old Castle for more elegant, traditional Slovenian dining. 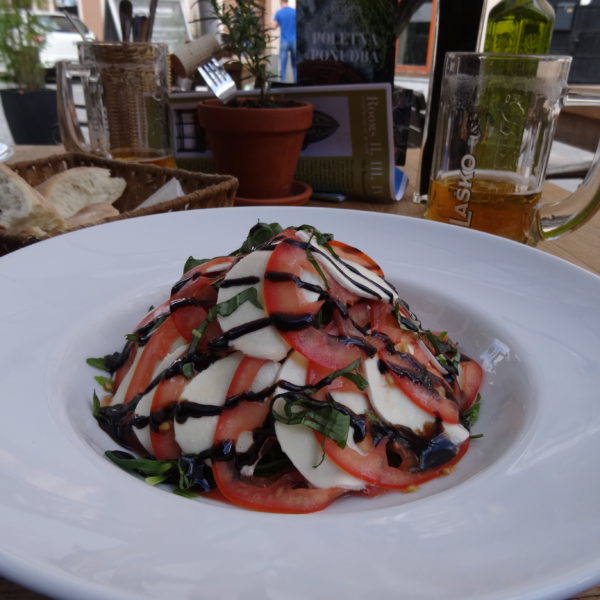 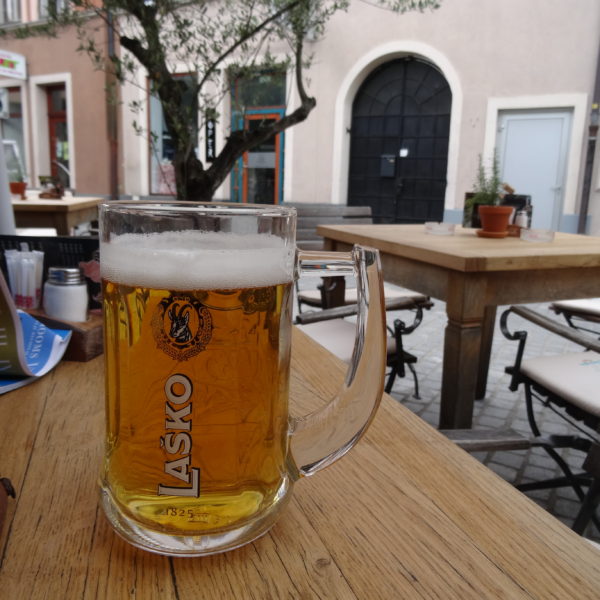 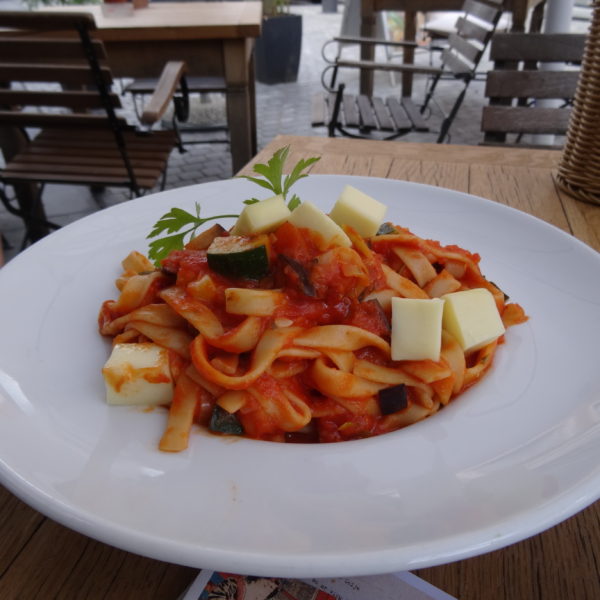 From the Ljubljana train station, you can buy a return ticket and choose from several departure times that will get you to or from Celje in about 90 minutes. You’ll pass through the scenic Sava River gorge and a town called Kresnice where my grandmother grew up! If you choose to stay overnight, there are plenty of hotel options in Celje or the surrounding area. Thanks for clicking on the Trip Advisor links in this post to browse hotels and make your reservation. It supports this blog at no cost to you.

Lost in Translation: Make sure you tell the taxi driver you want to go to “STARI Grad”, meaning Old Castle. Grad is the name of an actual town in eastern Slovenia and our non-English speaking driver thought we wanted to go there. Pointing up at the castle should make your meaning clear, even if you don’t speak Slovene. By the way, Celje is pronounced “Sell-yuh.” 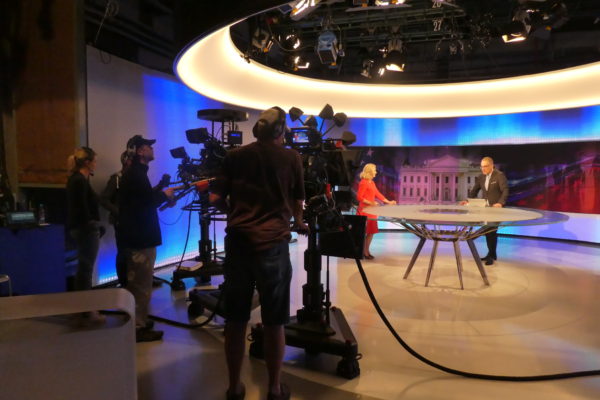 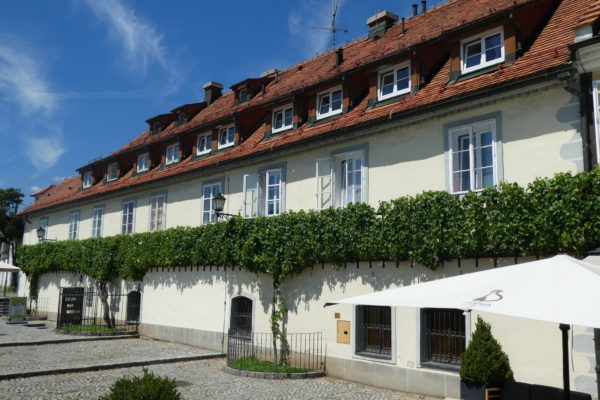 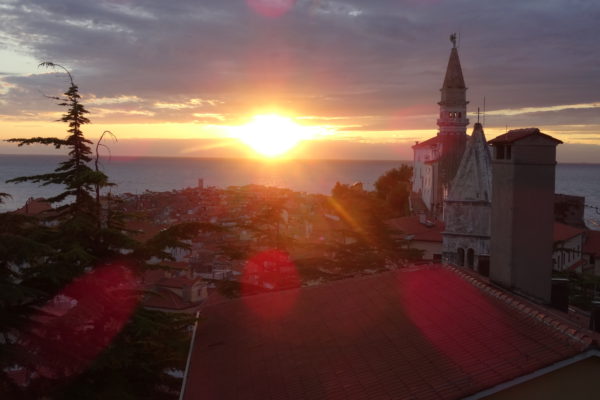