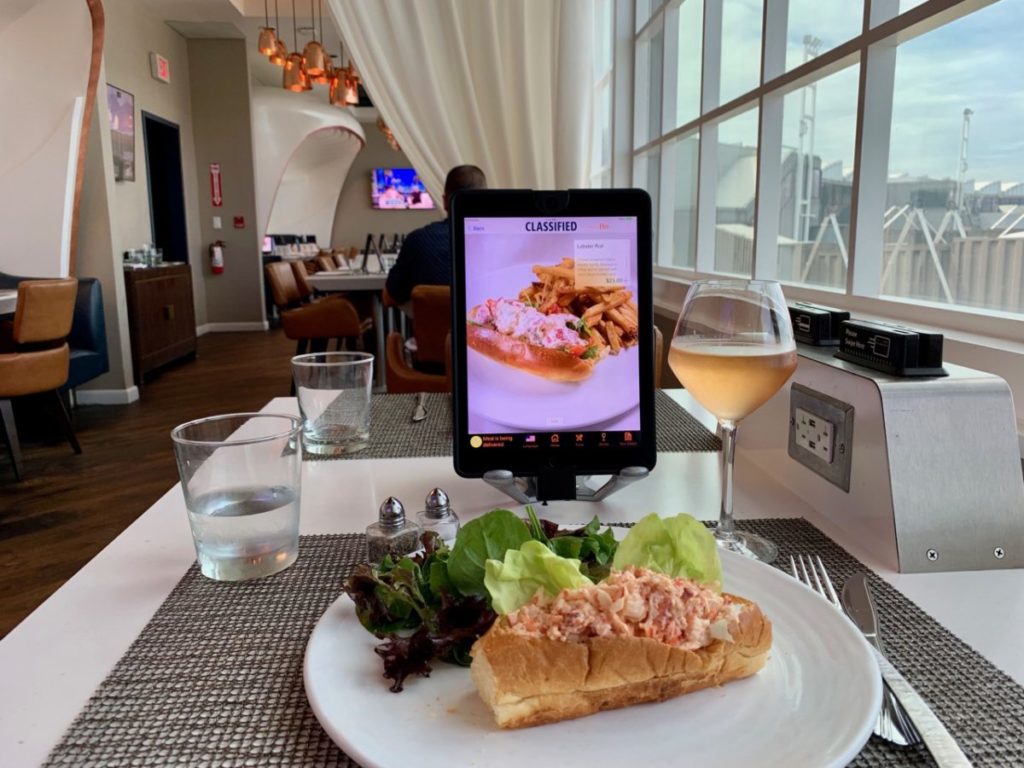 What happens in Newark stays in Newark. And maybe that’s a good thing.

I’d like to tell you all about my experience at United’s invitation-only restaurant in the C Terminal of Newark Airport; but it’s classified. As in Classified, the name of the restaurant.

I’d heard about the “secret” restaurant from a former student, a TV reporter who covers transportation. I put it on my list of things to someday blog about. Much to my shock, I received an invitation in my email, perhaps due to my platinum status with Mileage Plus, and perhaps because I was traveling on a Tuesday: not a popular travel day among more frequent business travelers.

Diners with a reservation at “Classified” are directed to report to this French restaurant in Newark Airport for further instructions.

My flight from Nantucket was delayed by an hour because of air traffic control issues in Newark. When I emailed Classified to tell them I’d be late, they cheerfully adjusted the time. My confirmed reservation came with instructions to report to a French restaurant near Gate 120 in the C Terminal. When I told one of the greeters I was there for “Classified,” she ushered me through the restaurant to an inconspicuous door in the back. That led to a dark tunnel, which brought me to the actual restaurant. Up to this point, very cool indeed! 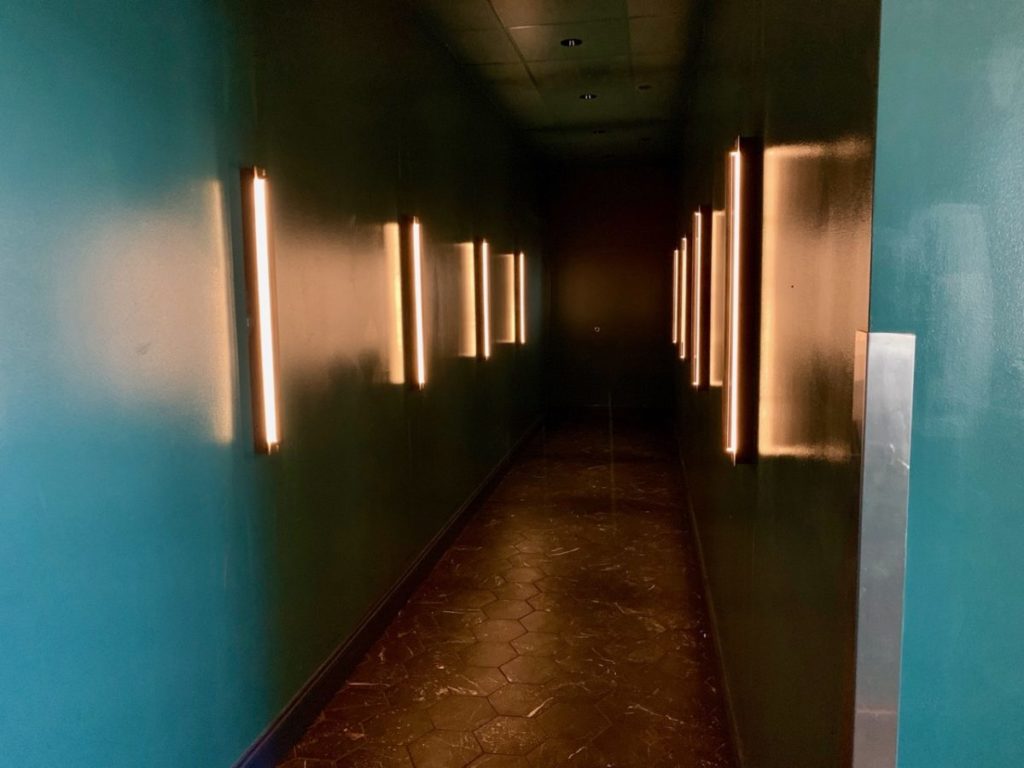 The coolest part of United’s Classified restaurant experience at Newark Airport is this secret passageway.

The “Secret” Service: Tablets Only

I was greeted by a friendly waiter and shown to a corner table for one; only one other table was occupied in the space that seats about 40 people. A family with young kids and another solo traveler arrived while I was there. TVs were tuned to daytime talk shows with the sound off.

Once I had visited the restroom and took my seat, the experience took a sharp turn in the wrong direction. Before I offer my frank impressions, let me say that my overall experience with United and the Star Alliance has been positive. I’m grateful for the little things like an upgrade or a kind flight attendant, and I frequently tweet about it to share the love. I also write on my blog and social media about the benefits of loyalty to Star Alliance for my international travel. So what went wrong here?

Automated Ordering on Malfunctioning Menu Tablets: The entire menu is on a tablet on the table top, similar to the tablets seen throughout the C concourse. The kind and courteous waiter said he could not take my order and offered to explain the tablet.  It scanned my boarding pass and determined that I was also a Chase Explorer United credit card-holder, for a 20% discount. The waiter pointed out the few vegetarian offerings: two salads. I’m OK with dairy and seafood, so I had a little more to choose from. Unfortunately, by the time I had decided, the tablet decided I was out of time and the device would not scan my ticket a second time. The waiter came by and had to punch my order in again at a higher price. He was able to add the discount and an automatic tip on his own. 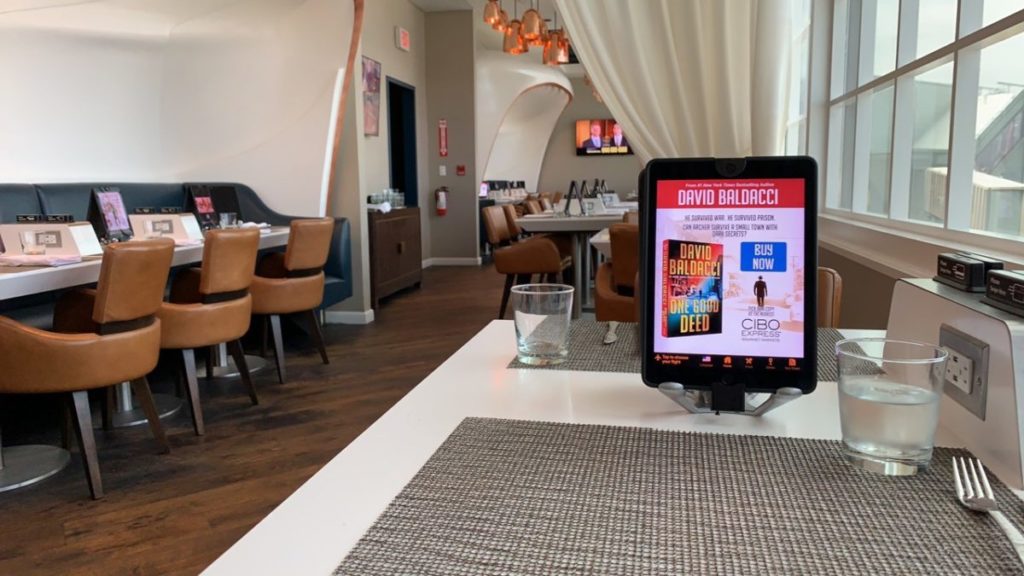 Instead of service with a smile, you’ll get a malfunctioning tablet that flashes nonstop advertising in your face.

“With a professional server like you, why do I have to use the tablet to place an order?” I asked. The young man simply shook his head. “I ask that all the time,” he replied.

Disappointing Food and Wine: The lobster roll that was brought to my table was considerably more puny than the one pictured on the menu and missing the juicy chunks of Maine lobster that were promised. I think there were bits of lobster in there somewhere, but the stale hot-dog bun didn’t do much to enhance the flavor. (See photo at the top of the post.)

There was a choice of salad greens or fries and I chose the “salad,” which turned out to be plain green leaves without dressing. When I asked for oil and vinegar, the staff seemed confused. They brought a couple of plastic cups; one contained olive oil and the other contained the type of white vinegar you might use to clean the counter top. What kind of upscale restaurant kitchen has no balsamic or red wine vinegar? I began to wonder if there even was a kitchen; maybe my lobster roll was imported from some random restaurant on the concourse. It was not anything like the scrumptious lobster roll I had tasted on my trip to Nantucket.

I also selected a glass of rose. It tasted like the bottle had been open for a while and in another venue I probably would have sent it back. By now, the waiter was nowhere to be seen and I was literally afraid to order anything else from the tablet, which was flashing non-stop advertising in my face.

High Concept that Never Takes Off

The bottom line is that Classified is a cool idea that is just executed very badly. I had talked with the flight attendant and my neighbors on the incoming flight about how excited I was to be invited. I’m guessing everyone was fantasizing that a “secret” restaurant would have the atmosphere of an exclusive speakeasy, rather than the ambience of a school lunchroom. There’s no bar, no atmospheric lighting once you get through the tunnel at the entrance. 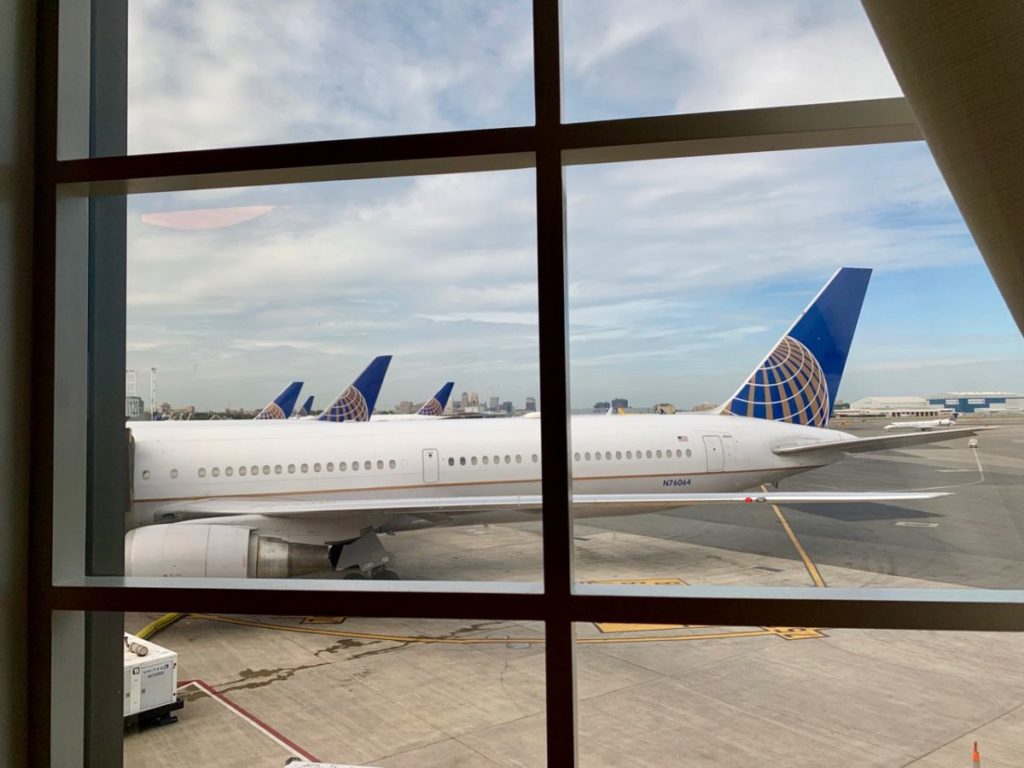 The view from the “Classified” restaurant: United planes and not the New York City skyline.

The view of a row of United planes parked at the gates was distinctly uninteresting, especially when you consider that a different location in the Newark airport might have offered the New York City skyline in the distance. The servers could do a lot more to enhance the experience, besides refer diners to the tablet, bring the food and then disappear. With my discount, I paid about $37 for a poorly prepared sandwich and sour wine. I’d be willing to pay a little more for an experience that was memorable in a good way, a step up from just ordering a sandwich at any restaurant on the concourse.

Just to give United the benefit of the doubt, it’s possible that they do other menu items well. Maybe they are into burgers and steaks and just don’t do the other things. They definitely need to up their vegetarian game.

I still had more than two hours to wait for my connecting flight and decided to use the time to compare the Classified experience to the United Club in Newark. My Chase Explorer one-time pass was refused at the gate of the Terminal C club and I was sent to a “pop-up” club nearer to my gate. It immediately became obvious that “pop-up” was secret code for a big public waiting room with bags of chips and a server pouring warm beverages into plastic cups. 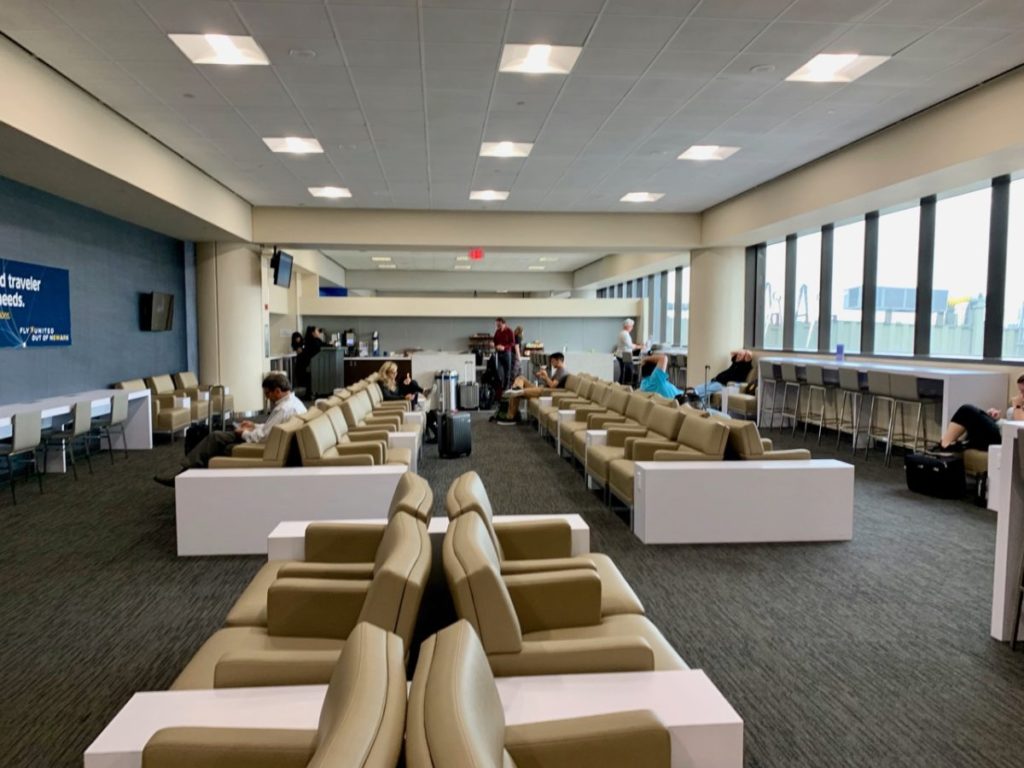 After being turned away from the real United Club, I was sent to this “pop-up” with bags of chips and warm drinks.

And no restrooms. I was sent back out to the concourse to wait in a long line for the ladies’ room. Later, when I tweeted United Customer Service about that, I was told I should have been informed about the restroom issue when I checked in, and that I should have used the regular club where I had been turned away. Could I have my pass back? No.

Using my Mileage Plus pass in the “pop-up” lounge entitled me to wait in a long line for the restroom back out in the concourse.

Final Thoughts on Mileage Plus Perks

I’m blogging about this in the hope that United will find a way to do better for their most frequent customers in one of their main transit hubs. And to spare other travelers the disappointment that I felt. You’re better off to pick one of the restaurants in the newly renovated concourse if you have time for a meal on your layover. “Classified” is a secret that deserves to be forgotten.

A few months after this experience, I was notified that the Mileage Plus loyalty program is “evolving.” Translation: The new spending requirements for achieving premier status on United have increased to the point where it seems impossible for a small business traveler like me to make the cut without overpaying for flights. The spending requirement waiver provided by my business credit card (for which I pay an annual fee) has been discontinued. No longer can I qualify by the actual amount of miles I flew with my butt in a United seat; instead there’s a point system that apparently is tied to the price of my ticket. Maybe that’s the real secret that United was keeping classified: they didn’t value my business in the first place.

Staying overnight in Newark or New York City? Thanks for clicking on these links and supporting my blog by making your reservation on Trip Advisor.

Want more insider travel tips? Like @strangersinthelivingroom on Facebook, and sign up for the occasional email when there is a new post here on the blog. You can follow Terry Anzur on Instagram,Twitter and Pinterest. I’m in the top 1% of Trip Advisor, and you can read all of my reviews @strangersblog on the Trip Advisor feed. Don’t be a stranger! 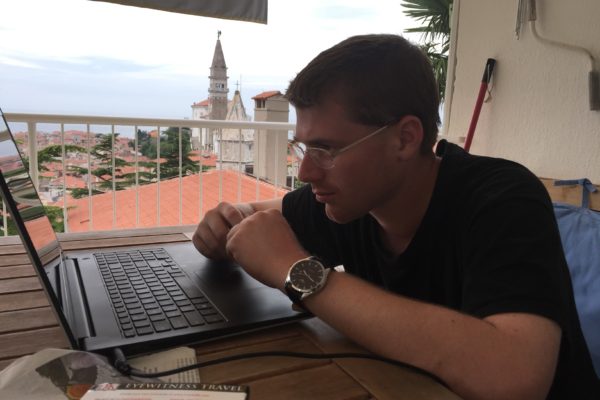 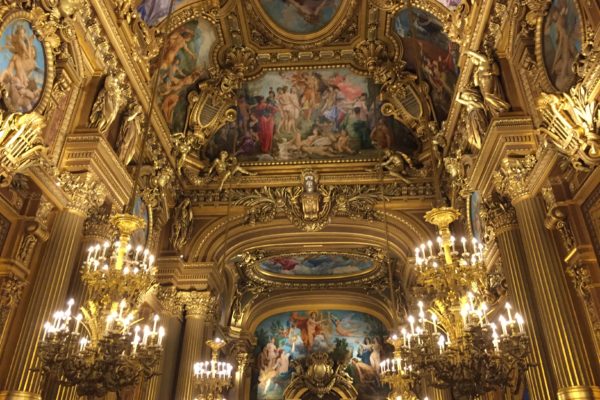 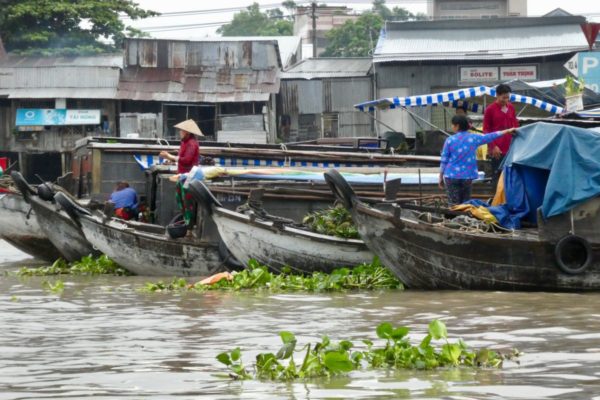 Vietnam: Floating Markets and Mud in Can Tho